A robot that is operated mostly by a remote and features a camera is probably what you are looking for. Humans have complete control over the action of such robots. What features can make such a product most viable?

It may be wires where the robot and the remote are both connected with cables or wires. But if is tethered, the robot can be used in a stationary system only. Also, the cables come in the way of the applications of the mobile robot while the wires may come in their path. 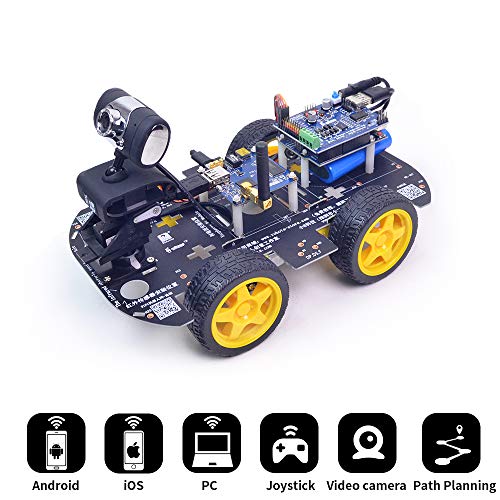 With a wireless remote control, the main body is not bound to any cable or wire allowing it unrestricted movement.

You also have the operator-assisted mode of remote-controlled robots where the human operator asks the robot to perform errands of different levels of difficulty. But here the process of achieving the tasks depends entirely on the robot and not on its operator.

The technologies that are usually used in building such robots are –

Radiofrequency technology where the remote controls take the aid of radio waves to transfer codes through the transmitter and such robots can be operated from a distance of more than 100 ft. Modern satellite television systems use such remotes.

Sound technology focuses on sound frequency and various sounds like whistling, clapping, etc. can be programmed to trigger the function of various tasks.

Infra-red technology is the most commonly used and infra-red remotes are also known as transmitters which use infra-red light to send signals to the robot.

Speech recognition technology is the toughest as far as implementation goes but helps in interacting with the robots. Many APIs are available which integrate speech recognition.

Network technology uses various networks to function the remote and it can be wired or may be connected to an Ethernet. Also, it may be wireless like Bluetooth, Wi-Fi, etc.

The applications of such remote-controlled robots are –

But here we are concerned with a remote control robot with a camera which will be an educational and learning electronic toy for beginners and one of the best of this kind in the market are featured hereunder.

It would be ideal if such robots –

And it should definitely come with proper instruction booklets and have lots of clarity.

XiaoR Geek DS WiFi Smart Robot Car Kit With HD Camera is a WiFi smart robot car kit that has been made for people who love to get hands-on experience with Arduino programming, robotics knowledge, and electronics assembling. The HD camera is adjustable and comes with a USB Wi-Fi adapter which enables you to check video and image in real-time either on your smartphone or PC. The camera has a 2-axis pan and tilt kit which aids the camera to catch videos at any angle without even moving the car. The camera possesses manual adjustment of focus. The maximum resolution of the dynamic video can be 640*480P and the frame rate is up to 30F/s.

It comes with a detailed video tutorial regarding the process of assembling the robot car from scratch and all the source codes, necessary programs, learning materials, and circuit graphs. It possesses an automatically self-built signal hot spot once the power is on. The user will just have to connect a PC or smartphone (iOS/Android APP) with the signal of the car to control it.
With the help of the drag-and-drop graphical programming software you just need to plug and play and see whatever you want. It is quite easy for Arduino robot learners. It is planned for beginners to learn Arduino programming and get experience in the assembly and design of the robot. The design of the robot is compatible to suit different users.

The expansion board has many pins which help you to add some sensors so that you can extend other functions like ultrasonic obstacle avoidance, ultrasonic distance detecting, line tracking, etc. The source code is supplied and once you are able to master every experiment you will be able to build your own platform base directly on the robot car platform.

With the automatically self-built signal hotspot with the power on you can control car movement, take videos and photos and adjust camera direction wirelessly. You can transmit real-time camera images to the smartphone and send control commands to the car via the WiFi module. The 2DBi External WiFi Antenna provides long transmission distance and high signal intensity, steadily and quickly, bringing it to you in real-time.

The Lithium battery comes with a protection board, the battery provides around 3 to 4 hours of operation. It can also be continuously charged and discharged. The Arduino WiFi robot supports the XR BLOCK graphical program to help you master the controls of the robot more quickly.

The product has an excellent star rating and is priced around $135 at the time of writing.