Although it has been some years since this robot has been released in the market, it’s popularity has not dented. 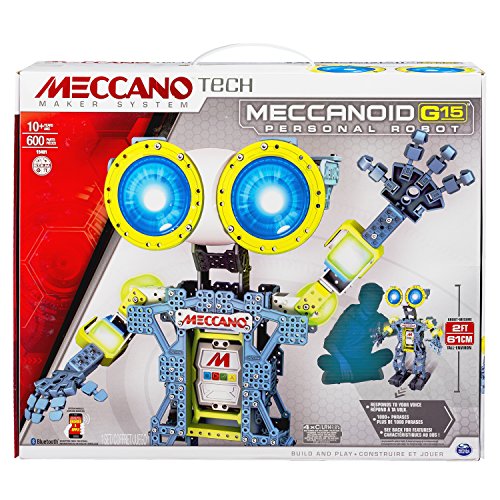 This Meccano meccanoid g15 personal robot can be a perfect gift for any child of 10 years or older who has an inquisitive mind.

This model of Mecanno robot comes with 621 parts and two hand tools to build the two-foot-tall robot that can say more than 1,000 phrases and uses voice recognition technology. Other than that included in the box are 1 Meccabrain, 1 LED Module, 2 Hand Tools, 4 Servos, 2 Rear Wheel Assembly, 2 Motor Gearbox Assembly, and an instruction sheet. It is powered by six different motors which give it realistic movement. Its mecha brain contains 64 megabytes of flash memory allowing it to learn movements and record sounds.

The robot’s default language is English but you can change the language by connecting the robot to a computer and installing one of 12 other languages to play with. It is built such that when it gets annoyed its eyes turn green. This mechanoid Robot can give kids a high-five. It can also tell you the time Meg when asked. You can also use learned intelligent movements to create animations by physically moving the robot and storing the animations for mechanoid to remember later.

The four buttons on the front of mechanoid can also be used to answer yes or no to mechanoid’s questions. It can record movement, saves elements or playback movement. You can also download the free ios and android app to program mechanoids movements and sounds though the sounds will play through the app and not the robot.

There’s also a smartphone holder on the front of Mechanoid so you can scan in front of it and make the robot mimic your moves. However, the holder is not sized to hold every smartphone.

It takes about three hours to build this robot and the instructions are easy to follow. The leg wires and some other parts can be hard for an adult-sized hand to connect or reach so small hands will be best for this. So involve your child in building the robot. That said young kids might need help from an adult to put this together and it might take longer than three hours depending on one’s age and skill level. 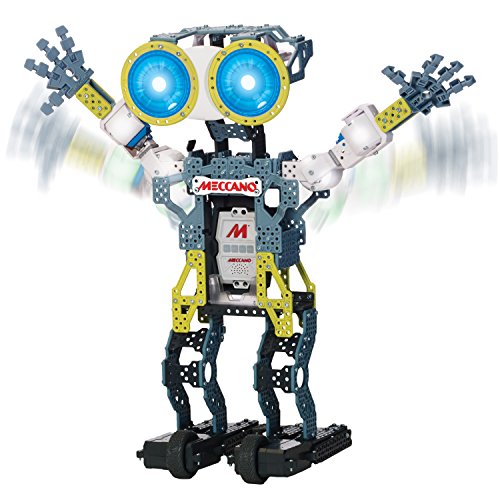 You’ll also need four C batteries to power the robot and those are not included. While the building process can be daunting, once you have assembled this robot you will feel glad and satisfied with the time and effort as it’s a very clean toy. it’s interactive, responds well to voice commands and the app commands and it’s programmable. So kids can make it do and say all sorts of silly things.

It provides great enjoyment for kids aged 10 and up and will appeal to kids who are especially interested in robots and robotics It’s actually more than just a toy. The advanced technology used in Meccano Meccanoid G15 Personal Robot will make it your kid’s new best friend.